Cycling to Sziget is no Sweat

One of Europe's largest music events, the Sziget Fesztivál, starts next week on Hajógyari (aka Óbudai) Island. With as many as 390,000 (2009 peak) attending the week-long event, it generates an enormous volume of traffic, particularly over the 4-5 kilometres between downtown Budapest and the festival site.

A number of public-transport options exists, including Budapest Transport Company (BKV) charter buses for inbound and outbound campers; passenger ferries on the Danube, and that old standby, the suburban train (HÉV). All these are fantastic ways to get close-up and personal with your fellow Sziget revelers before you arrive at the massive queues at the island entrance. 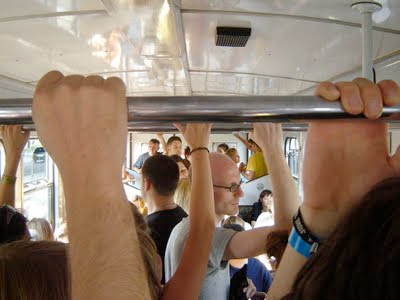 For those who prefer a better ventilated mode of transport, there are bicycles. Designated bike routes on both banks of Danube link downtown with the festival site. And once there, you can take advantage of a free, guarded bike parking lot.

Greg Spencer, an American based in Hungary, commutes by bicycle everyday with his six-year-old boy. He works as a project manager in the Green Transport Topic Area of the Regional Environmental Center for Central and Eastern Europe. He blogs about the budding bicycling scene in Budapest at http://cyclingsolution.blogspot.com.